< Back to results
Home / All Reviews / Hyundai Santa Fe

The extra bold statement that is the new, fourth-generation Hyundai Santa Fe has been launched in South Africa.

By Thami Masemola on 21 Jun 2021
The extra bold statement that is the new, fourth-generation Hyundai Santa Fe has been launched in South Africa. Definitely one with a strong attention-seeking missile, the Santa Fe becomes the brand’s flagship model in every way; size, positioning and price. Hyundai is currently riding a strong wave of success, with a regular top 5 position in sales locally. The Santa Fe will just add to that, albeit in smaller numbers. 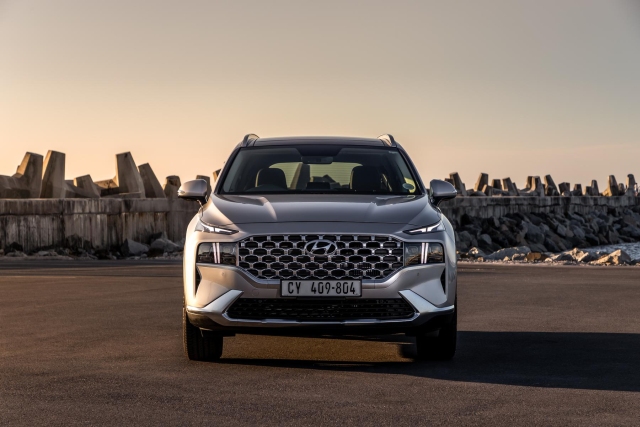 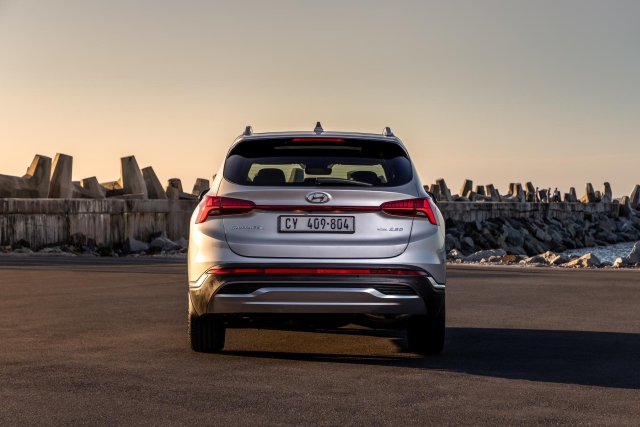 It was less than a decade ago when nobody in this country could imagine paying R800 000 for a Hyundai. But here we are now. The only question is; is it worth it? We should be able to answer that in a while. First let’s have a look at what is on offer. 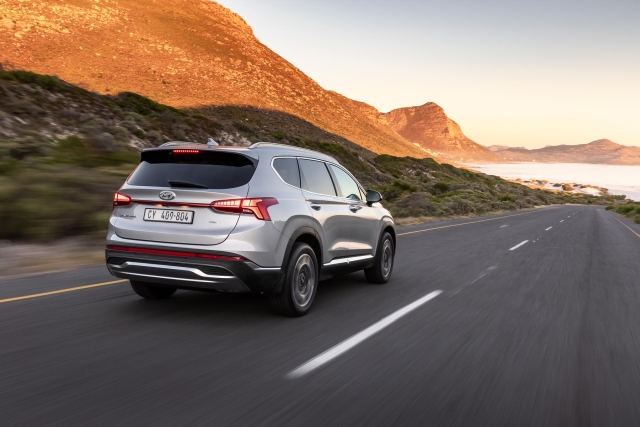 Santa Fe is clearly not a small vehicle, measuring some 4.78 metres long, 1.9m wide, 1.7m tall and with a three-row seating arrangement for seven seats in total. So it is a family SUV, first and foremost. Designers have really gone bold on the front end, with a massive geometric front grille flanked by LED lights. The T-shaped daytime running lights drop from the bonnet through the headlights, while also wrapping around the curve. 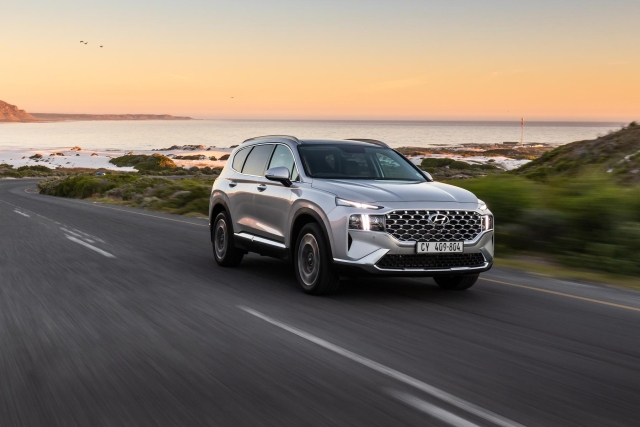 Chrome surrounds feature around the windows, while a strong chrome bar sits on the lower end of the sides. Hyundai used 18-inch wheels for the standard car, but one can specify 19 or 20-inches for higher models. At the rear we see three layers of lights, the centre of which contains LEDs and brake lights, as well as a connecting light bar running across the tailgate. Colours available to choose from are White Cream, Typhoon Silver, Lagoon Blue, Phantom Black, Taiga Brown and Magnetic Force (a metallic dark grey). Regular boot space is 634 litres. 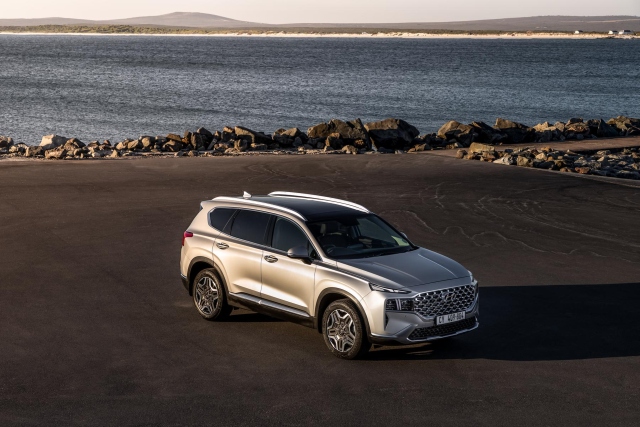 Hyundai scores high marks for the interior where the driver is treated to a fresh operating area that is different from the usual. For example, there is no gear lever or rotary knob. Instead individual buttons labelled D, P, N and R are available for the obvious. Soft touches on the dashboard, doors and centre console give the Santa Fe airs. Add to that the diamond pattern top part of the leather seats, wireless charging for the phone and a 20.3cm touch screen infotainment system and you have a plush interior environment. We did miss a bit of colour though, given the all-black ambiance. A highlight feature is the ability to start the engine from outside the car using the key. This automatically sets the temperature at 22 degrees Celsius. 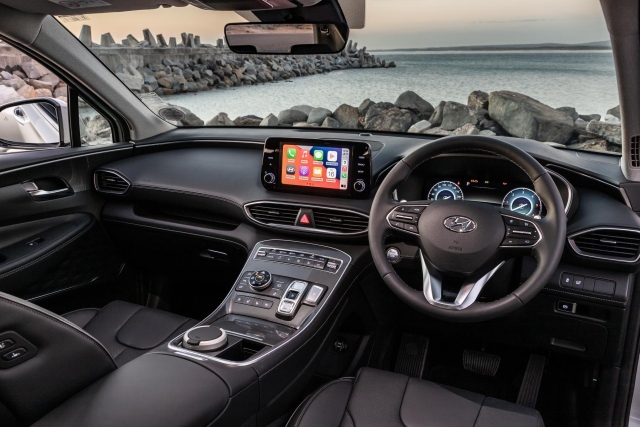 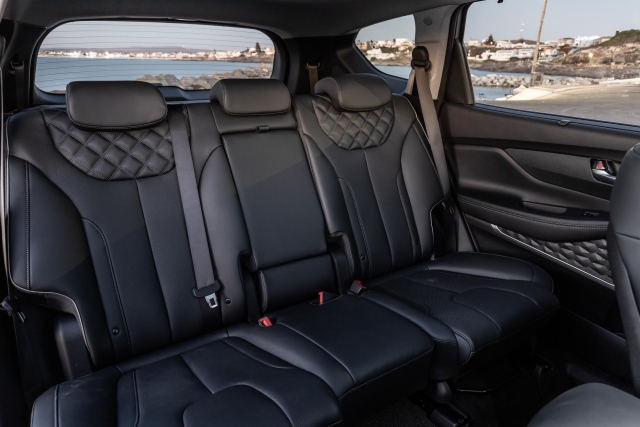 Speaking of the engine, Hyundai installed a 2.2-litre turbo diesel motor with 148kW of power and 441Nm of torque. It is mated with a new 8-speed DCT automatic transmission driving all four wheels through the company’s own HTRAC (Hyundai Traction) AWD system in the Elite model. We achieved an average consumption of 10.1 litres per 100km in mixed conditions. The driver can select a driving mode for mud, sand, and snow driving as the situation calls for it. At the same time they can choose the car in Comfort, Sport, Eco or Smart mode as well. 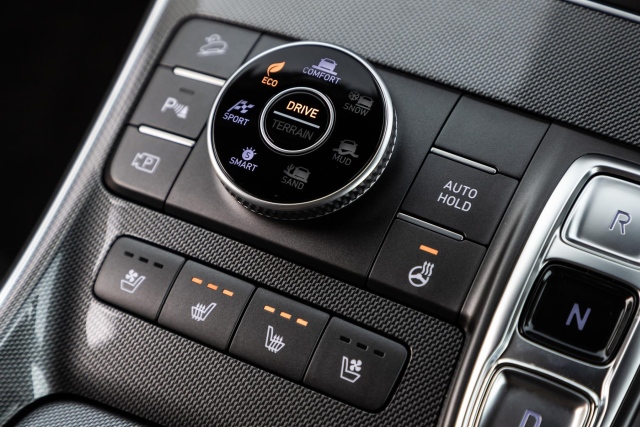 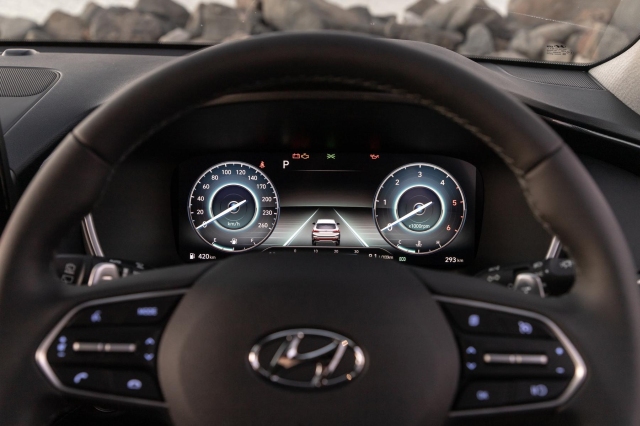 A great deal of work has gone into the new Santa Fe’s development. The car is comparable to its Japanese and German rivals in all aspects. Which brings us to the question of price. Fair enough, it is a steep price to pay. Even considering all the features, it remains pricier than its competitors.